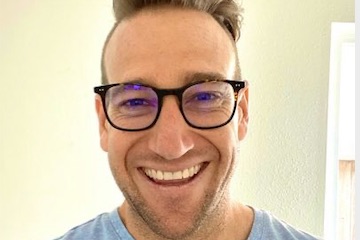 He’s an authority on ecommerce advertising, in other words. I recently spoke with Holiday about his ventures, the state of ecommerce, and advertising dos and don’ts. What follows is our entire audio conversation and a transcript, edited for clarity and length.

Eric Bandholz: Please tell us about yourself.

Taylor Holiday: Our agency, Common Thread, is focused on helping folks grow their ecommerce business. We operate in the consumer-product ecommerce world, especially at the early stage of companies, from zero in annual revenue to about $30 million. Our work includes paid customer acquisition, conversion rate optimization, and creative production — anything to help businesses navigate that early stage.

We then use what we’ve learned with our own ecommerce brands, which are Fielder’s Choice Goods, Bambu Earth, and Slick Products. We understand what goes into growing an ecommerce business because we’re doing it every day alongside our clients. It’s a fun journey.

Bandholz: There are so many things I want to ask. You have three ecommerce sites, an agency, and an online community. You’re running multiple businesses.

Holiday: Well, the good news is I’m not. The key as a leader is to build an ecosystem. I have no day-to-day responsibilities inside of 4×400, which is our ecommerce group. Andrew Faris is the CEO of that company. I’m more or less the chairman of the board, to collaborate. Our member community site, ADmission, is run by Grant Zanini and Adrianne Verheyen. My day-to-day responsibility now is the agency. I rely on awesome people to help build the rest.

Bandholz: Are the companies independent? Is there a parent?

Holiday: They’re all owned by a holding company called Dream Labs, which is the overall parent. Dream Labs also includes commercial real estate holdings and a culture development agency called Tell Me Your Dreams and a small influencer marketing agency. They’re all owned by Dream Labs. My partner Josh is the sole employee. He handles all of our legal and mergers and acquisitions — those sorts of things.

Bandholz: One of my mistakes in building Beardbrand was Facebook advertising. Five years ago, we were getting an obscene return on ad spend, something like five-times. I didn’t think that was good enough, and we pulled from Facebook altogether. In hindsight, I wish we would have pushed a bit harder. What other advertising mistakes do you see from ecommerce sellers?

Holiday: I hear that sentiment from many entrepreneurs who were running businesses in 2016 and ’17. When I was running QALO, our wedding-ring site, my partner and I had that same feeling. Everyday items were generating returns of five-to-one, six-to-one, whatever it was. And we didn’t have this sense of the moment. It’s hard to be present in that and figure out what the opportunity represents. In some ways, that’s the situation we find ourselves in again now — the world is sort of collapsing around us during the pandemic. Ecommerce is experiencing this massive growth.

For us, as an agency, across all of our clients in virtually every category, April was a crazy record month of revenue. And so as we think about that. We ask ourselves, “What are the mistakes that people will make?” These windows, such as now, they open and shut. There certainly indications, at least while we’re in quarantine, there are some big opportunities in the ecommerce world.

What we’re seeing for ecommerce right now is around demand creation, capture rate, and volume — not necessarily profitability. We’re seeing an influx of consumers that are suddenly using ecommerce. For a while there, in the early days of the pandemic, CPMs were very low. We saw some incredible efficiencies. In a lot of ways, that window is already closed. Prices on ads are going back up.

So if you’re a business with a strong lifetime value, strongly consider deferring some of the short term profitability and capture customers right now, as consumers come online.

For some of our businesses, we see both efficiency and volume. It’s not via a specific ad format or even channel. We’re seeing people get more profitable volume through YouTube and search than before. We see more profitable ad dollars during Covid-19 than previously.

Bandholz: I can echo those sentiments. We’ve seen a massive boost on the Beardbrand site as well. You mentioned LTV — lifetime value. For folks new to commerce, it’s the total that a customer will spend. How do you calculate lifetime value? Is it one year, two years, or the entire lifetime of the company?

Holiday: It’s a great question. I hate words that have subjective meaning. “Lifetime value” is a good example. The industry defines LTV in many different ways. I prefer the phrase “cash multiplier,” which for us is a 60-day LTV. Ecommerce owners have this joke that we’ll all die waiting for our LTV to show up. The reality is that we should recognize the payback periods that we can afford because cash flow is king.

And so we help our clients focus primarily on 30, 60, and 90-day windows with the emphasis on that 60-day period. For most ecommerce businesses, second purchases from customers happen within 60 days of the initial one, regardless of product category. That’s why we focus on that 60-day window. We apply a general rule that we call the 30/100 principle, which is the idea that you want to see your LTV increase 30 percent within 60 days and 100 percent within a year. If you have reached both of those markers, it’s an indication that you’ve found an ongoing relationship with your customers that reflects a good product-market fit.

Bandholz: What about attribution? The challenge we’ve had is we buy ads on Facebook, and then the customers come in through Google or whatever. How does a merchant know that advertising is performing?

Holiday: It’s the biggest question, right? With the most complicated answer. The less diverse your media mix, the easier the problem is to solve. It gets difficult with a broad media usage — podcasts, radio, TV, billboards, print, everything else. The key is to understand what each position in the funnel of your advertising serves, and ensuring that you’re not convoluting the waters.

Here’s an example. Our company Fielder’s Choice Goods sells leather wallets. Our media mix is fairly simple: Facebook, Google, and YouTube. We define each stage very clearly. We know that Facebook ads reach people who have not been to our website — pure customer acquisition.

If you look just on at clicks, then what we know for sure is that somebody who has never been to our website, or at least hasn’t been in the last 30 days and has never bought a product from us, clicked on my ad and went to the website. I can feel secure about that as an indication of demand generation. I don’t care if the purchase ends up getting assigned in Google Analytics to organic search or direct or paid search. In terms of attribution, I am less concerned about where demand capture happens and more concerned with demand generation. Where did the initial impetus for the purchase begin?

So attribution is not important to us. It’s not why an ad unit exists for us. It’s a hole that plugs up our funnel and ensures that we are capturing as much of the demand creation that we possibly can. So you have to think about what each ad unit intends to serve. And as you move down the funnel, it’s prospecting.

As we get to remarketing on Facebook, we’ll tighten the attribution window — from a 28-day click to seven days. And then at the bottom of the funnel, when you get to abandoned cart orders, we’ll look only on a one-day click basis. Because where it gets noisy is when you start allowing attribution to be cross-pollinating between your different ad channels.

We don’t believe in using ad dollars to market to existing customers, primarily because the whole point of Facebook is to create an audience that you own and control. When customers are in an active window — the average time for a repeat purchase of, say, 70 days — we will exclude that group from any paid media dollars and communicate exclusively with them in email, chat, organic, social, anywhere where it’s free to advertise. We don’t want to pay for that second purchase, especially when we’re using LTV calculations.

And that’s also where you’ll see the most noise in Facebook advertising. You’ll see merchants that advertise to existing customers. They’ll see a massive return on ad spend. But it almost always comes from the combination of their email. Advertising is creating a mess.

Bandholz: What’s the ad budget for your clients? I would imagine it’s significant.

Holiday: It’s more about revenue. A growth client is usually somewhere north of $2 million a year in revenue. That calculates to somewhere around $30,000 to $50,000 a month in ad spend. So that’s sort of the entry point into the agency system. But to help folks in an earlier stage, we created, again, ADMission, our community. It’s intended to be a coaching, training, and teaching platform. Because hiring an agency or even a freelancer doesn’t make sense when you are spending less than $15,000 a month. So if you think about a percentage of ad spend, which is how a lot of agencies charge, the big businesses create economies of scale and can get an agency to charge 4 percent of ad spend.

But if you’re spending $10,000 a month and you’re paying somebody $2,500 a month — a 25-percent markup — it’s going to be hard to be profitable. The best thing we can offer people in the early stage is coaching to do it themselves.

Bandholz: I could talk to you another three or four hours. But we’ve got to wrap it up. Where can people get more information? Where can they follow you?

Holiday: I’m @TaylorHoliday on Twitter. My wife would say I’m there too much. Otherwise, feel free to say howdy at Common Thread.