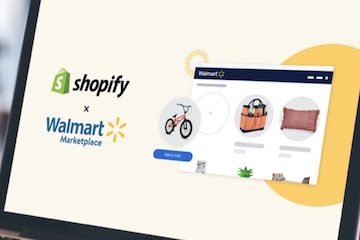 “Ecommerce Briefs” is my occasional series on news and developments that impact online merchants. In this installment, I’ll report on Walmart’s partnership with Shopify, the struggles of brick-and-mortar retailers, and Instagram’s ecommerce efforts.

Last week Walmart and Shopify disclosed they are joining forces to bring 1,200 sellers onto Walmart.com’s marketplace by the end of 2020. Walmart intends to target “U.S.-based small and medium businesses whose assortment complements ours,” according to a company post from Walmart Marketplace Vice President Jeff Clementz. This is Walmart’s first partnership with an ecommerce platform.

Shopify sellers don’t pay to list their products on Walmart.com but do pay “referral fees” when they make a sale. Shopify merchants must apply to connect their Shopify stores to a Walmart seller account. Once approved, they can sync their product catalogs and create product listings on Walmart.com. Inventory and order management will continue to be handled by Shopify.

Initial comments from sellers on Shopify’s app store who tried to sign up for the Walmart app during the first week indicate that there are bugs to be worked out as many had difficulty getting the app to work.

Walmart’s first-quarter results showed the impact of the Covid-19 pandemic on consumer behavior. The company’s ecommerce sales grew 74 percent over the same period last year. Walmart reported significant growth for grocery drive-through pickup and delivery services. The company introduced Express Delivery in 1,000 stores, augmented its pickup service in 3,300 stores, and implemented same-day delivery from 1,850 stores. Walmart intends to expand this service to about 2,000 stores by the end of this month. The company hired more than 235,000 new employees during the quarter as it tried to meet increased consumer demand.

In an effort to increase efficiency at a time when its costs are going up, Walmart announced that it would discontinue its Jet.com unit. Last month, it streamlined its mobile shopping experience by combining the Walmart and Walmart Grocery apps.

Only Amazon has greater ecommerce sales than Walmart but the most similar competitor is Target, which has also experienced a doubling of ecommerce sales during the first quarter of 2020. Last month Target announced the acquisition of technology assets from Deliv, a failed, same-day “last mile” delivery company.

A recent “Insight Report” from Coresight Research predicts that retail brick-and-mortar closures in 2020 will rise dramatically in the United States to 20,000 to 25,000, far surpassing 2019’s 9,821 closures. Between 55 and 60 percent of these will be mall-based stores. The report also predicted that bankruptcy filings would increase as many companies had reorganization or financing activities short-circuited by the Covid-19 pandemic. More of these filings will be Chapter 7 (liquidation) rather than Chapter 11 (restructuring).

Already struggling retailers such as large mall-based anchor stores are the most likely to go under because of lack of cash flow due to store shutdowns as well as heavy debt.

To date this year, the home and office retail sector has had the highest number of announced store closures at 1,161, followed by apparel, footwear, and accessories at 986.

Coresight also conducted a survey of consumers in late May and found about half of those whose spending patterns changed as a result of store closures think that it will take at least five to six months before their spending returns to normal. Brick-and-mortar retailers that were struggling to stay in business before the pandemic hit are unlikely to recover fully, according to Coresight.

Furthermore, the closure of non-essential stores has accelerated the shift to online purchasing. Some of the migration to ecommerce will likely be permanent, further challenging ailing merchants and possibly encouraging them to focus more on ecommerce.

Instagram is expanding its commerce eligibility requirements to more businesses and creators. The new rules go into effect July 9 in all countries where shopping is currently supported. As of that date, participating businesses must tag products on Instagram from a single website that they own and sell from. The objective is to give users “a consistent and trusted shopping experience.”

Instagram said it would update its sign-up process to provide merchants with clearer guidance into the types of businesses it is best suited to support, including creators wishing to sell merchandise. New participants will go through an updated onboarding flow, and existing sellers will receive an in-app notification in the coming weeks with instructions on how to comply.