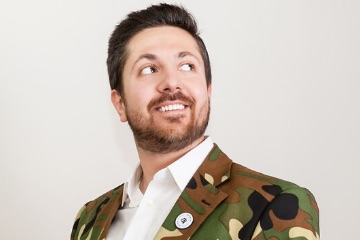 Kurt Elster’s “The Unofficial Shopify Podcast” has been downloaded more than 1 million times. His agency, Ethercycle, helps Shopify merchants drive revenue and profit. And his newsletter at KurtElster.com contains tips and strategies to scale a Shopify store.

“I eat, sleep, and breathe Shopify. I even have a Shopify license plate,” Elster told me.

You might call Elster the unauthorized Mr. Shopify. I recently spoke with him about the platform, notable merchants, and his pet peeves, among other topics. What follows is the entire audio version of that conversation and a transcript, which is edited for length and clarity.

Kurt Elster: I’ve been a Shopify expert since 2011. I have worked on Shopify exclusively since 2015. I eat, sleep, and breathe Shopify. I even have a Shopify license plate.

Bandholz: Is Shopify the place to be? Is it still hot?

Elster: Yes. Over a million merchants are on Shopify. Some of the real power of it is the partner ecosystem. They’re up to 12,000 partners. Having access to an army of people who can help you grow your store, whether it’s through apps, integrations, or professional services, adds a ton of value to the core platform.

Bandholz: What are you seeing from people who reach out to you for consulting? Are they larger companies on the Shopify Plus side? Or startups?

Elster: It is all over the board. Right now there is a gold rush into ecommerce. I am seeing more new store builds than ever before. Our clientele tends to be Shopify merchants who have bootstrapped and validated their business. They approach us to take it to the next level.

We do a lot of front-end work, setting up the theme. That’s the hardest part for merchants. Many merchants can’t see the forest through the trees on their own website. They spend more time on it than anybody else, which makes it tough to see minor issues. So having a third party do it could be beneficial.

Bandholz: What are some of the biggest mistakes people make on Shopify?

Elster: The best part about Shopify is the app ecosystem — the app store. And the worst part about Shopify is the app store. No matter what feature or integration you need, there is probably one or more apps for it. And, likely, they’re all reasonably priced. Some will even be free. But it is easy to get addicted to apps. You start playing app roulette. You think, “If I just get the right one, it’s going to seriously boost my sales.”

Well, no, it doesn’t work that way. But the larger problem is as you install these apps, each one has a payload. Each one adds weight to the site, and they also add to your monthly recurring expenses. So if you’ve got one app, fine. If you’ve got eight apps, fine. But 40 apps — that’s a problem.

I have been retained more times than I can count just to figure out installed apps — which ones to keep and which to remove. So that’s a trap that people can fall into. It’s similar to WordPress plugins.

My current pet peeve is the main menu. It’s the front door to an ecommerce site. It’s how visitors find products. But if I load up a random independent online store, the main menu is “Home,” “About,” “Blog,” “Contact,” and then there’s a single word that says “Shop.” And it’s a drop-down menu. That’s the most important part! It’s entirely hidden behind a drop-down.

Go to major ecommerce sites. None of them do that. The main menu is devoted to shopping. All of that other stuff is in a secondary menu or the footer.

Bandholz: Tell us about some innovative brands.

Elster: My favorite client at the moment is Hoonigan, an automotive lifestyle brand. They sell lifestyle apparel, mainly. At one point years ago they had the most viral video on YouTube for a car video called Gymkhana that’s like half driving. Think if you combined driving and, I don’t know, a Cirque de Soleil show. It’s quite the activity.

It’s stunt driving, basically. It’s very cool. So it went viral, and an automotive lifestyle brand was born out of that. It’s a very creative team, about 30 people in Long Beach, California. They do a phenomenal job in their marketing, their designs, and their ads. They have built a community. That’s the magic that a lot of brands miss — building a genuine sense of community.

Bandholz: We’ve talked about Shopify themes. Do you have recommendations for themes? There are a ton of them.

Elster: I have opinions on Shopify themes. So does the theme team at Shopify. I have talked to members of that team at the various Shopify Unite conferences. The team is extremely selective as to what’s in the theme store. Themes that are ultimately approved typically have limited options and settings to make them easier to use and less intimidating.

My favorite in the last couple of years is the Turbo theme by Out of the Sandbox. They’ve been consistently updating it. I love it. I used it on [Jay] Leno’s Garage. I’ve used it on CORSA Performance. Just an endless list of sites.

But even though Out of the Sandbox has several themes in the store (including popular ones such as Parallax and Retina), Turbo is not in there. That’s because it has a ton of options jammed into it. I don’t think it would ever be approved because it’s intimidating to a new merchant.

There’s a balance there. If you’re launching your first Shopify store, I wouldn’t start with a big, expensive theme. I would start with a simple free theme and then switch to a bigger, more involved one later.

And the last thing I would do is buy a theme from whatever marketplace. Anytime we’ve used themes outside of the Shopify store, we have regretted it. Again, the team is extremely stringent about what gets in there.

Bandholz: So how do you differentiate websites when the bones are the same?

Elster: That a common fear. It’s unfounded, however.

The same is true of themes and even more so. A theme is just a way to showcase your content and brand. But don’t use the default styling, colors, and fonts and just insert your logo. At the very least, change the colors and typography to match the brand. It sounds simple, but a lot of people skip it. Change the design of the header. That will immediately alter the entire feel.

Bandholz: A lot of companies with huge catalogs have shied away from Shopify. Is that a valid fear?

Certainly we had to manage some things. But the site is now one of the fastest I’ve ever worked on. When we first started, it took 30 to 40 seconds to load a collection page because of the number of products we were filtering through. But Shopify is giving us new technologies such as React. A catalog with six figures worth of product can load in two to three seconds.

Bandholz: I could talk all day about Shopify. Unfortunately, we don’t have all day. How can our listeners find you?

Elster: My Twitter handle is @Kurtinc. Other than Twitter, the best way to reach me is via my newsletter. Head to KurtElster.com, sign up for my newsletter. It comes from my actual email address. You can hit reply, and it will go to my inbox.

Bandholz: Everyone should listen to your podcast, “The Unofficial Shopify Podcast.” It’s amazing.