Google's latest experiment is a video shopping platform designed to introduce consumers to new products in under 90 seconds. The company today is launching Shoploop, a project from Google's internal R&D division, Area 120, where it tests out new ideas with a public user base.

Shoploop's founder, Lax Poojary, had previously worked on online trip planner, Touring Bird, also at Area 120. Last year, that effort became one of a small number of R&D projects to graduate and become a part of Google itself.

Poojary says his new idea for interactive shopping was inspired by how consumers today use a combination of social media and e-commerce sites together when considering purchases. For example, users will pop between a social media app, like Instagram, then head to YouTube to see a tutorial or demo, then — if they like what they saw — actually make a purchase.

Of course, video shopping is not a novel idea. A number of startups, and even large companies, have already embraced a combination of video and commerce. 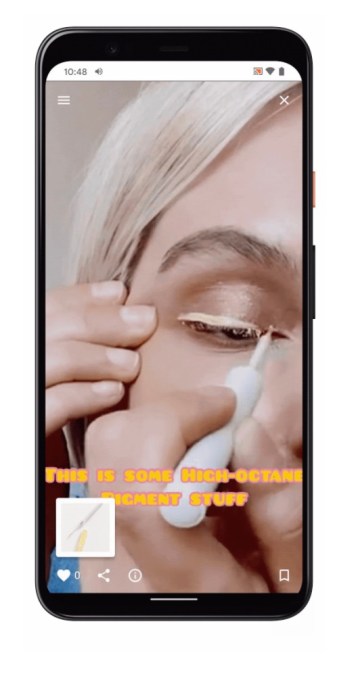 Amazon, for example, runs a livestreaming platform, Amazon Live, on its retail site. YouTube this year introduced a new shoppable ad format and is placing products to buy underneath videos. Facebook has enabled live shopping, as well, and made an acquisition in this area in 2019. Instagram now has its own Shop destination, too.

There are also a number of mobile shopping startups that have embraced video, like Dote, which raised $12 million last year. Popshop Live raised $3 million in January. NTWRK combines shopping and live events. Depop sells with both photos and videos, similar to Instagram.There's also Yeay, Spin, and other apps. And there are startups focused on providing technology for brands and influencers engaging in this space, like Bambuser, MikMak, and Buywith, to name a few.

That is to say, Shoploop hasn't discovered a new, untapped trend. It's simply joining in.

The shopping experience on Shoploop is interactive. Users don't just scroll through images and text, but instead watch videos where creators show off things like  nail stickers,  hair products or makeup. The team says it's starting with products in categories such as makeup, skincare, hair and nails and its working with creators, publishers and store owners in this market for the app's content.

The experience is similar to watching YouTube tutorials, but distilled down to the best bits. (Or perhaps it's more like TikTok, in that case) The demos are meant to be relatable, giving consumers a feel for the brands and products in real life. When consumers find a product they like, they can save it for later or click to be directed to the merchants website to complete the purchase. The app also allows you to follow your favorite Shoploop creators and share videos with friends and family.

Such a product could prove important to Google's larger mission around Shopping, if it gains traction. Google recently redesigned its Shopping vertical and shifted it to include mostly free listings, in response to Amazon's growing ad business. Finding more ways to engage online consumers could be beneficial to the internet giant, and this video-slash-influencer fueled shopping experience appeals to a younger demographic, in particular.

Shoploop is launching today on mobile and is working on a desktop version. You can reach it via https://shoploop.app from your smartphone.