While Google Cloud Platform has shown some momentum in the last year, it remains a distant third behind Amazon and Microsoft in the cloud infrastructure market. But Google got some good news from Canalys today when the firm reported that GCP is the number one cloud platform provider for retailers.

Canalys didn't provide specific numbers, but it did set overall market positions in the retail sector with Microsoft coming in second, Amazon third, followed by Alibaba and IBM in fourth and fifth respectively. 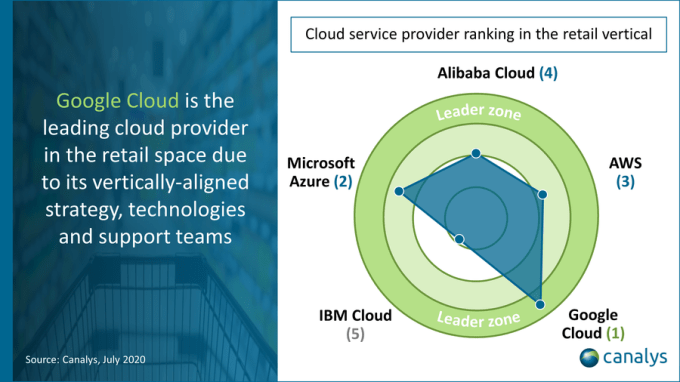 It's probably not a coincidence that Google went after retail. Many retailers don't want to put their cloud presence onto AWS, as Amazon.com competes directly with these retailers. Brent Leary, founder and principal analyst at CRM Essentials, says that as such, the news doesn't really surprise him.

“Retailers have to compete with Amazon, and I'm guessing the last thing they want to do is use AWS and help Amazon fund all their new initiatives and experiments that in some cases will be used against them,” Leary told TechCrunch. Further, he said that many retailers would also prefer to keep their customer data off of Amazon's services.

Canalys Senior Director Alex Smith says that this Amazon effect combined with the pandemic and other technological factors has been working in Google's favor, at least in the retail sector. “Now more than ever, retailers need a digital strategy to win in an omnichannel world, especially with Amazon’s online dominance. Digital is applied everywhere from customer experience to cost optimization, and the overall technological capability of a retailer is what will define its success,” he said.

COVID-19 has forced many retailers to close stores for extended periods of time, and when you combine that with people being more reluctant to go inside stores when they do open, retailers have had to take a crash course in eCommerce if they didn't have a significant online presence already.

Canalys points out that Google has lured customers with its advertising and search capabilities beyond just pure infrastructure offerings, taking advantage of its other strengths to grow the market segment.

Recognizing this, Google has been making a big retail push including a big partnership with Salesforce and specific products announced at Google Cloud Next last year. As we wrote at the time of the retail offering,

The company offers eCommerce Hosting, designed specifically for online retailers, and it is offering a special premium program, so retailers get “white glove treatment with technical architecture reviews and peak season operations support…” according to the company. In other words, it wants to help these companies avoid disastrous, money-losing results when a site goes down due to demand.

Even as cloud infrastructure growth slows, revenue rises over $30B for quarter