Live streaming is a popular way to sell products in 2020, thanks, in part, to how the pandemic has impacted retailing. But within this broader trend, at least a few entrepreneurs are finding a new niche promoting products to social media friends and followers.

These live streamers don’t have any inventory or even drop shipping relationships. Rather, they sell products via affiliate marketing.

Irene Enriquez-Chan, marketing manager for BeLive, a live-streaming software provider, published the results of her own live-stream affiliate-marketing experiment after the company noticed that some of its customers were using the platform in that way.

Enriquez-Chan’s results were not overwhelming. She managed to sell about $500 worth of products in about two hours of live streaming, earning $10 in commission, or roughly $5 per hour.

“Ten dollars might not seem like a big deal, especially if you live in the United States, but let’s put it in the context of someone living in the Philippines,” wrote Enriquez-Chan, who lives in the metropolitan Manila.

“The minimum wage in the Philippines is $10 per day,” stated Enriquez-Chan. “If you are a starting virtual assistant, you will be earning around $2 to $3 per hour.”

“More importantly, affiliate marketing is passive income, so even when I’m not actively posting my links today, and someone else finds my video on YouTube and decides to buy, I will keep earning a commission on that,” Enriquez-Chan wrote. 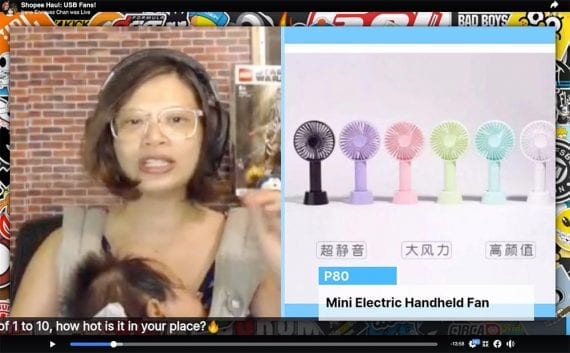 Enriquez-Chan experimented with promoting affiliate products via live stream. She managed to sell about $500 worth of goods in about two hours, earning $10 in commission.

“At the end of the day, I am watching my friends, my colleagues, my teammates, somebody that I am familiar with doing the live shopping show,” Mayer continued.

Effectively, Mayer is describing a form of influencer marketing, albeit one that doesn’t necessarily require hordes of fans and followers. Rather, in Mayer’s opinion, there is an opportunity for everyday folks to generate affiliate income.

“We have a lot of people right now that are sitting at home, they don’t have any…place to work, and they need to generate some money,” said Mayer, who was speaking in early July 2020. “Live shopping…is a huge opportunity for everybody that’s at home with a computer and a cam. That’s all you need because the majority of [live-streaming sellers] are using affiliate networks.”

The idea is simple enough. Choose a handful of products you use and like. Sign up for affiliate programs associated with those products. Live stream your sales pitch.

In her experiment, for example, Enriquez-Chan sold fans to fight the summer heat. But there are lots of opportunities. An avid reader could promote his top 10 favorite novels. A talented mom could live stream a how-to crafting video and sell the project’s components via affiliate links. A teen could describe his or her favorite fashion and sell shorts, tees, and shoes via affiliate links.

If this trend is as prevalent as Mayer and Enriquez indicate, there may be at least three opportunities for established merchants.

This could mean offering additional affiliate incentives, providing resources to help these sellers promote products, and even offering instructions on how to set up live streams. Moreover, retailers could promote an affiliate’s live stream via the company’s own social media and email channels.

The retailer could use live-streaming affiliate sellers to garner new sales in a market that is otherwise difficult to enter.

Affiliate selling via live streams has at least a couple of potential barriers to success in the U.S. market.

For one, Americans could feel relatively less comfortable pushing products to family members.

Also, the U.S. has shown signs of job recovery. Combine this with the hope that Congress will have some form of new stimulus package available, and some unemployed workers may not need money badly enough to start a live stream affiliate business, as Mayer suggested.

Regardless, this sort of marketing and selling could help businesses and their live-streaming affiliates.