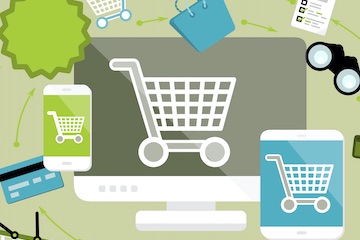 The Department estimated all U.S. retail sales for the second quarter of 2020 at $1.3 trillion, a decrease of 3.9 percent from the first quarter of 2020. Brick-and-mortar sales accounted for the entire reduction.

June 2020 data from the National Retail Federation shows that 45 percent of U.S. Baby Boomers (birthdates 1946 to 1964) are doing more online shopping due to the pandemic. Thirty-one percent tried online grocery shopping for the first time in June and July, according to IRI Worldwide Strategic Analytics, a retail consulting firm.

According to IBM’s U.S. Retail Index, Covid-19 has accelerated the shift from physical-store to ecommerce by roughly five years as ecommerce is projected to grow by nearly 20 percent in 2020, while department store sales are projected to decline by more than 60 percent.

With the uncertainty surrounding the impact of Covid-19, brick-and-mortar retailers will rely more on digital sales. Many chain retailers have already announced that their stores will be closed on Thanksgiving Day. They include:

As for Black Friday, no leading retailer has announced changes to its in-store schedule. However, retailers will likely limit the number of people in the store at one time to maintain some semblance of social distancing. Many shoppers will likely forego the crowds and do their shopping online. Black Friday has been losing its significance as many retailers have spread the holiday discounts over several days.

Here is how one major retailer is handling the holidays. In a note to customers, Target CEO Brian Cornell stated:

Let’s face it: Historically, deal hunting and holiday shopping can mean crowded events, and this isn’t a year for crowds. That’s why our biggest holiday deals will be available earlier than ever, so you can shop safely and conveniently without worrying about missing out on deals that usually come later in the season. Starting in October and continuing throughout the season, you’ll find Target’s lowest prices of the year on items in stores and online…

Macy’s CEO Jeff Gennette said his company will start its holiday marketing soon after Halloween and will focus on digital sales and curbside pickup.

Soaring ecommerce sales will tax the supply chain. The announced elimination of overtime for postal workers by new U.S. Postmaster General Louis DeJoy could affect the Postal Service’s ability to deliver gifts on time during the peak holiday season. Many merchants, including Amazon, use the Postal Service for last-mile delivery.

Amazon is in discussions with Simon Property Group, the owner of many of the malls that J.C. Penney and Sears occupied, to turn some of the large anchor sites into distribution centers. Simon Property Group’s malls have 11 Sears stores totaling more than 2 million square feet and 63 J.C. Penney stores with more than 10 million square feet. Delivery drivers could unload packages and, separately, pick them up for last-mile delivery. Other potential uses for these locations include customer product return sites — a logistics component where brick-and-mortar stores such as Walmart have an advantage — as well as curbside pick-up.

The downside for Simon Property Group is that a lease to Amazon could create problems with retail mall tenants, as distribution centers would not generate as much foot traffic as retail stores. Such a move could trigger clauses in lease agreements that allow tenants to reduce their rent or break their lease.

As for 2020 holiday sales, merchants that offer the most shopping and shipping options will be the winners in what promises to be an unconventional season.