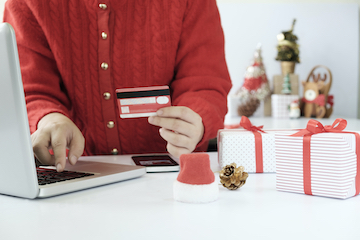 Despite strong increases in the past several months, predicting this year’s holiday ecommerce sales made me feel a bit like Ebenezer Scrooge.

I wanted to be optimistic about the Christmas sales, but three of my five predictions are negative overall. The other two, click-and-collect ecommerce and gig-economy delivery, are generally positive, but might still impact pure-ecommerce business negatively as they compete with omnichannel sellers.

The U.S. presidential election is not the only thing that could produce uncertainty and cause some shoppers to pause during the 2020 holiday season — what with Covid-19 and all. But, the election’s timing at the beginning of the Christmas gift-buying rush might hurt retail sales.

Next, “a sizable majority of registered voters (79 percent) say the economy will be very important in their decision about whom to vote for,” according to Pew Research.

If the nation’s shoppers are worried about their economic future, they may spend less on gifts and decorations in 2020.

In 2019, I predicted sales from click-and-collect and in-store pick-up would dominate last-minute shopping.

This year, thanks to the pandemic and the rise of curbside pick-up, I expect click-and-collect sales to grow by more than 50 percent as shoppers use the service throughout the holiday season.

Omnichannel retailers — from Walmart and Target to single-location shops — will be able to offer the speed and convenience of online ordering coupled with the certainty of local pick-up. This will be particularly important if the ecommerce supply chain or small package delivery services experience trouble during the holiday season.

For this reason, it may be a good idea for some ecommerce-only retailers to offer click-and-collect services at their fulfillment warehouses or pop-up locations.

Services like DoorDash will go to Walmart and pick up your groceries. And, since Walmart doesn’t just sell groceries, it’s not far-fetched to imagine that gig-economy delivery services could start to pick up Christmas gifts too.

Local delivery providers could be DoorDash, Uber, or even a startup operating in a single town or region.

Moreover, a savvy retailer could hire local delivery contractors to ferry packages from its store or warehouse directly to local shoppers.

Rising ecommerce package volume and Covid-19 have combined to cause problems for all small-package carriers. And don’t expect everything to be resolved by December. Rather, ecommerce deliveries will likely remain relatively slow throughout the holiday season.

The global pandemic wrecked many retail supply chains earlier this year. The problem was multi-faceted.

Folks locked in their homes for weeks turned to ecommerce for much of their shopping, creating unprecedented online sales growth. But the same virus that kept shoppers in front of their computers also kept at least some workers out of factories.

To make matters worse, many larger retailers stopped purchasing goods as they dealt with bankruptcies. Now, at least some of those companies are struggling to buy enough inventory for the holiday season.

Thus consumers may find some retailers running low this year on popular items.

Every autumn since 2013, I have made a series of ecommerce-related predictions for the coming holiday season. Last year, my list included just three.

“Click-and-collect Will Drive Last Minute Shopping.” RetailWire’s managing editor, Tom Ryan, reported that “on Christmas Eve, Target prepared nearly five times the number of products for curbside pick-up of online orders than it did the year prior. The finding provides more evidence that holiday procrastinators have discovered the convenience of buying online and picking up in-store,” which is also known as click-and-collect.

Similarly, CMO by Adobe, an online magazine, said that click-and-collect “revenue was up 35 percent on average for the season…[hitting] a peak in the seven days leading up to Christmas, when revenue increased 55 percent as consumers undoubtedly did some last-minute online shopping.”

We can put this prediction in the correct category.

“Sales from Mobile Will Account for More Than Half.” Smartphones generated 36 percent of the online retail revenue between November 1 and December 31, 2020, according to Adobe. Smartphones did account for most retail site traffic, but it seems most consumers completed their purchases on desktops. So I got this one wrong.

“45 Percent of Sales Will Be on Amazon.” According to Statista, Amazon had 52.4 percent of the U.S. ecommerce market in 2019. The company likely dominated Christmas ecommerce sales, too.