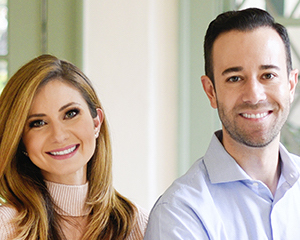 The YouTube-to-ecommerce business model may be the best way to build an audience of customers. It worked for my company, Beardbrand, when I posted beard-grooming videos on YouTube, which attracted followers, who, ultimately, purchased our products. I’ve interviewed other entrepreneurs — Aaron Marino, Brian Goulet, Sven Raphael Schneider — who have applied the same strategy.

And that brings me to Lisa and Paul Jauregui. Lisa’s passion for cosmetics led to her YouTube channel, which educated consumers on the use and selection of those products. And that audience generated customers for BK Beauty, a direct-to-consumer cosmetics brand that the Jauregui’s launched in August 2019 in Austin, Texas. In its first year, BK Beauty recorded a whopping $1 million in revenue.

I spoke recently with Paul Jauregui about the launch of BK Beauty, balancing YouTube content with ecommerce product sales, and the challenges of fulfillment, among other topics. What follows is our entire conversation in audio, and a transcript, which is edited for clarity and length.

Eric Bandholz: How do you attract a million dollars in revenue in the first year?

Paul Jauregui: We launched our online store, BK Beauty, on August 1, 2019. We went from zero to seven figures in less than 12 months. But our story started many years before then. We’re a cosmetics and makeup company. My wife and I run it. She is on the makeup side in terms of her product expertise. She started about 15 years ago with MAC Cosmetics [the Canadian cosmetics manufacturer]. She’s a makeup fanatic.

Bandholz: What was her position at that company?

Jauregui: It was her dream job. She eventually became a regional trainer. She traveled and educated all the MAC artists on makeup techniques, customer service, products, you name it.

The educational component became another passion for her. That led her to start a YouTube channel about six years ago. It was a way for her to teach women about makeup. So she took to YouTube with no thought of what it would lead to.

After about three years, she realized, “I can monetize this.” So she started meeting other YouTubers, learning the ropes, and figuring out affiliate links and brand partnerships. It got to the point where she realized that she could step out of her day job and do this full time — a YouTube content creator.

About two years ago, as her audience was growing, I met Casey Armstrong from ShipBob. He was with BigCommerce in Austin at the time. Our kids were in the same class at school; it was a random encounter.

My background is also in marketing and business, like Casey’s. But he would discuss ecommerce, which I had no idea about.

He found out what Lisa was doing on YouTube. He told us we had done the hard part, which was attracting an audience. He said we should develop a product and a brand around that audience. So that’s when our journey started. We invested some money, went through the product development cycle (which took about 12 months), and launched last August selling directly to customers.

Bandholz: How did you manage the relationship of starting your own products while representing other brands on YouTube?

Jauregui: Nothing has changed on her channel. She’s still engaged and working with many brands. There’s enough room in every person’s makeup bag for multiple brands. No one brand can solve it all.

Bandholz: The business model of BK Beauty is much different than getting sponsorships on YouTube. You have logistics, third-party fulfillment, website management.

Jauregui: Yes, very different businesses. There’s a lot of synergies, but we distinguish the content creation on YouTube from our product sales.

Bandholz: Let’s talk about your product development process. How many units did you buy? What was the investment?

Jauregui: We had no idea what the demand was going to be. We had some data from years of affiliate sales from Lisa’s YouTube channel, which provided insight into the purchasing behavior of her audience.

But developing products was new to us. We knew that we wanted to start with brushes. We didn’t know how to produce them.

Ultimately we attended a trade show where we connected with our manufacturer. We were able to negotiate net-30 terms out of the gate with a 50-percent down payment. Our initial inventory purchase was $15,000. That was for nine SKUs — nine different brushes — at 1,000 each. We sold out in three weeks.

Bandholz: How did you decide on prices?

Jauregui: Again, we were sitting on a mound of data regarding our audience’s purchase behavior. We wanted to cater to the biggest segment. We wanted a high-end product with a price that was attainable for most folks.

Our prices are not quite on the luxury end. We’re not super cheap, but our customers are getting a quality product.

Jauregui: We’re going to grow. We opened a small office, and we hired our first employee last November. She helps with most everything — fulfillment, customer service, all facets of the business.

We’ve been speaking with a few third-party fulfillment companies to find a good fit. For us, outsourcing fulfillment introduces new complexity. It’s unloading us from the burden. But we enjoy seeing the physical inventory and controlling how it’s packed as well as the unboxing experience.

Ultimately, however, it doesn’t scale. We’ve done $40,000 in one day. That’s a lot of orders. We’re not sleeping. We’re bringing other folks. So we’ll eventually get a 3PL.

Bandholz: How can our listeners follow you and buy your products?