Amazon is introducing a personal shopping service for men's fashion. The service, now available to Prime members, is an expansion of the existing Personal Shopper by Prime Wardrobe, a $4.99 per month Stitch Fix rival, originally aimed at women. With Personal Shopper by Prime Wardrobe, an Amazon stylist selects an assortment of fashion items that match a customer's style and fit preferences. These are are then shipped to the customer on a monthly basis for home try-on. Whatever the customer doesn't want to keep can be returned using the resealable package and the prepaid shipping label provided.

At launch, the new men's personal shopping service will include brands like Scotch & Soda, Original Penguin, Adidas, Lacoste, Carhartt, Levi’s, Amazon Essentials, Goodthreads, and more — a mix of both Amazon's own in-house brands and others. In total, Amazon says Personal Shopper by Prime Wardrobe will offer hundred of thousands of men's styles across more than a thousand different brands.

The service itself is similar in many ways to Stitch Fix, as it also starts customers with a style quiz to personalize their monthly fashion selections. Also like competitive fashion subscription services, customers can reach out to their stylist with specific requests  — like if they need a professional outfit for job interview, for example, or some other occasion where they may want something outside their usual interests.

But unlike Stitch Fix, which charges a $20 “stylist fee” which is later credited towards any items you choose to keep, Amazon's personal shopping service is a flat $4.99 per month. Another difference is that the Personal Shopper service will alert you ahead of your shipment to review their picks. You then choose the up to 8 items you want to receive, instead of waiting for the surprise of opening your box. 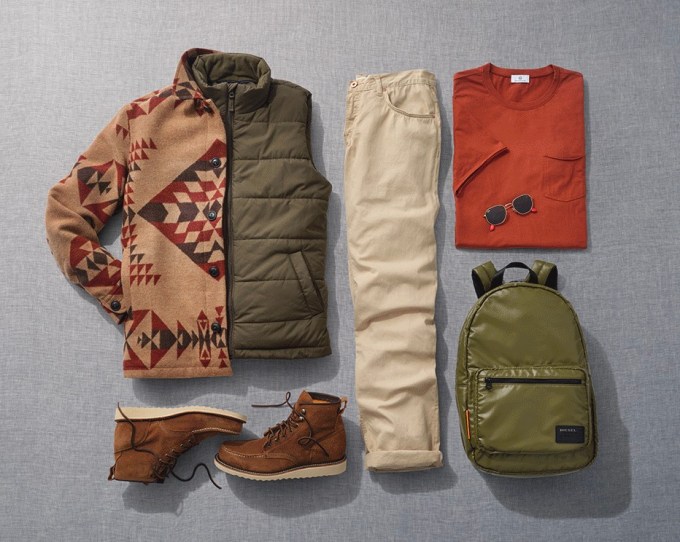 Before today, Amazon had offered men's fashion in its try-before-you-buy Prime Wardrobe product selection. But that service simply allows Amazon Prime members to request certain fashion items for home try-on, instead of paying for them upfront then returning what doesn't work. To date, Prime Wardrobe's biggest drawback has been that many of the fashion items found on Amazon aren't eligible for home try-on, particularly many of those from the most in-demand brands.

However, Amazon claims it doesn't stuff Prime Wardrobe with only its own brands. The company says less than 1% of its total selection of brands within Prime Wardrobe are Amazon-owned. (Of course, that percentage may be higher in the boxes customers receive from their personal shopper, at times.)

However, only “tens of thousands” of customers today use the Personal Shopper service on a monthly basis.

That means Prime Wardrobe is no real threat to Stitch Fix at this time, if making a comparison purely based on number of paying customers.

StitchFix has had longer to perfect its model and refine its insights which has allowed it to grow its active client base to 3.5 million. That figure is up 9% year-over-year, as of the company's latest earnings reported earlier this month. More recently, Stitch Fix benefited from the pandemic — after it got through its initial backlogged orders — as customers sought to change their style from businesswear to activewear.

Men's activewear had been particularly in demand, which is perhaps a trend Amazon had also seen ahead of the launch of its new service.