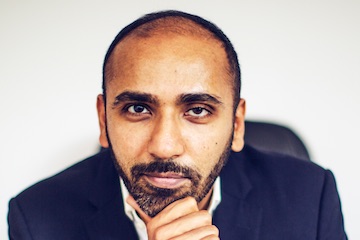 Despite reaching a whopping $100 million in revenue in just two years, Moiz Ali, the founder of Native deodorant, says the initial version was less than stellar.

“We had a pretty mediocre product,” Ali told me. “We understood that people were looking for [aluminum-free deodorant] and were willing to pay a higher price point for it. But our first attempt wasn’t that good.”

Two years later, having corrected product weaknesses and perfected marketing — and emailing every customer — Ali’s company was making $1 million in profit per month. That’s when he sold the business to Procter & Gamble.

How a startup entrepreneur reaches $100 million in revenue in two years is beyond me. I asked him that question and more in our recent interview. What follows is the entire audio version and a transcript, which is edited for length and clarity.

Eric Bandholz: Native is an amazing success. How did you do it?

We soon understood that people were looking for that product and were willing to pay a higher price. But our first attempt wasn’t that good.

So we spent the first year of the business iterating on the product and making it better. And once we generated good reviews and repeat purchases, we ramped up advertising and marketing. A few things worked really well for us. One was our repeat purchase rate. It sustained the business. We got it up to about 50 percent.

Finally, we were good at digital advertising. We were cost-conscious. We didn’t waste money. We knew what consumers cared about in terms of buying aluminum-free deodorant online, such as free shipping and a bunch of reviews.

Bandholz: What blows my mind is the 50-percent reorder rate.

Ali: It started at about 20 to 22 percent. I emailed every single customer for the first two years of the business, saying, “You got a stick of Native deodorant. Love to know what you think about it. If you love the product, please leave a review on our site. If you don’t, reply to this email and tell us what you don’t like, and we’ll try to fix it.”

The complaints were similar for the first year: a tough deodorant to apply, too many powders, not enough oils.

Again, we thought we’d be a male-oriented company. But our product was pulling out the underarm hairs of men, including my own. That’s how it became female-oriented.

We went through a lot of different variations. We would create a sample. I would try it. I might say, “This sucks. Let’s not use it.” Or, “This is fantastic. Let’s ship it to 10 consumers and see if they like it.”

We kept iterating. Finally, we launched the new formula. It was the summer of 2016.

That’s when our reorder rate went from 20 to 50 percent. And 90 percent of that was due to the product. Ten percent was doing a better job with email campaigns and marketing and getting our product into brick-and-mortar stores.

Bandholz: I love the name “Native.”

Ali: We wanted a name that connotes a natural product. And it’s short. Everyone can spell it and say it. The domain is NativeCos.com. I tried to get Native.com, NativeCo.com, and GoNative.com. None were available. So I settled on NativeCos. There’s no meaning to the “cos.”

Bandholz: You sold the company in two years to Procter & Gamble. Why part with it?

Ali: We were growing so fast in both revenue and profit. We couldn’t keep up. We were holding the business together with duct tape, so to speak. And I knew that to maintain the momentum, we needed seasoned, senior executives.

The month before we sold the business, we were doing $1 million in net profit. Ninety-nine percent of my net worth was in Native. I wanted more diversification in case something went sideways.

Bandholz: That’s the logical response. For me, and this a personal thing, I love my business partners. So selling the business is selling my friendships.

Ali: That makes a ton of sense. It’s definitely a personal decision based on where you are in life and your risk tolerance. I once spoke with Brian Lee, the founder of The Honest Company, ShoeDazzle, and LegalZoom. He told me he sold LegalZoom because he didn’t have any money. He had student loans. He had to worry about everything. After selling LegalZoom, those worries went away.

Bandholz: How did you transition Native from direct-to-consumer into retail?

Ali: Costco had reached out to us, as did Whole Foods. Seemingly every single retailer you could imagine had reached out to us to carry Native. We intentionally had not focused on retail. We had our just-in-time inventory system for DTC that could barely keep up with. So we never had excess products to ship to brick-and-mortar retailers.

That’s another reason why we sold the business. We were at an inflection point. If we’re going to continue growing, we need to expand distribution channels and product categories.

Bandholz: How did you set the valuation of Native when you sold?

Ali: There’s no easy way to do this. It can be based on multiples of revenue and profit. Or the business category, such as personal care. What do other companies sell for in that segment?

Most importantly, you have to look at growth. Growing from $1 million to $2 million over three years is much different than $1 to $2 over three months. That’s a very different enterprise valuation.

But the reality is the market will tell you. We talked to 12 potential buyers. All had similar offers in terms of price. P&G’s offer wasn’t the highest or best. Buyers are rational.

Bandholz: What’s next for you?

Ali: I’ve invested in a couple of companies this year. One is a direct-to-consumer women’s underwear company called Pepper, run by two young females who are fantastic entrepreneurs.

The other one is BrüMate, which I invested in just recently. It sells can coolers for White Claw and Truly, the hard seltzer drinks. I also joined the board, which is the first for a company that I’m not running.

I’m also investing in real estate. I’m trying to stay in the ecommerce community, too.

Bandholz: One more thing. If you could start over, would you use a platform such as Shopify or build your own?

Ali: We built Native on WooCommerce. I have much respect for Shopify. But I wish they would address some issues, such as a better checkout and an easier post-purchase option. I’m not sure what I would build my own platform. It would depend on the product.

One thing that I would do differently is spend more time with my co-workers. I was focused on growth and not enough on the people that worked at Native. And they were stellar. I wish I’d spent more time communicating my strategy, as opposed to just keeping it in my head.

Bandholz: How can our listeners follow you and reach out?

Ali: I’m on Twitter at my first and last name: @MoizAli. Listeners can also email me.