Walmart over the years has been working to turn its physical retail stores into online fulfillment centers, and now, with its latest set of test stores announced today, the retailer will try out ideas to make that transition more seamless. Walmart says it will deploy personnel to four test stores across the U.S., where they'll prototype and iterate on new technology and tools that will serve the needs of Walmart's in-store shoppers and online shoppers alike, including changes involving augmented reality, handheld mobile devices, new apps, in-store signage, omni-assortment, and revamped checkout stations.

The idea is to turn these four test locations into rapid prototyping environments, where teams can test solutions in real-time, make changes, scale what works and scrap what doesn't. Some of the changes being put into place will be visible to the customer, while others will be more behind-the-scenes.

At launch, Walmart has identified four areas where it's looking to test new ideas across assortment, inventory, picking and checkout process.

In one store, it will test moving the majority of the in-store apparel assortment online — meaning the same exact items can be found both in the store and online. This isn't always the case today, as not everything stocked in the stores are also on the Walmart website, and vice versa. This test will focus on determining what has to take place to make all the eligible items in a store “omni-available,” Walmart says, a reference to its desire to be a true “omni-channel” retailer. 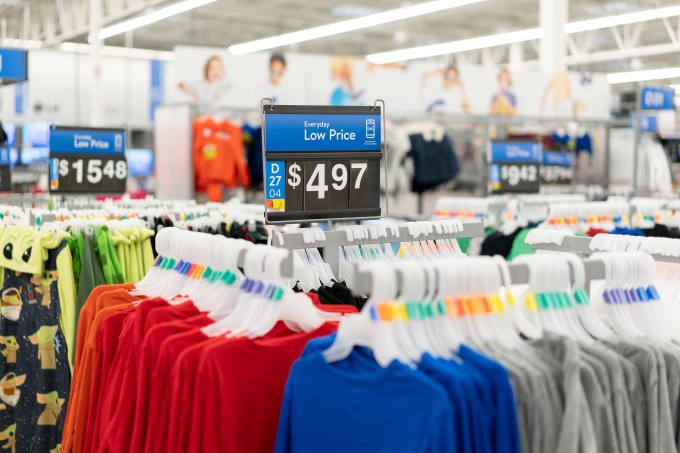 A second test will involve a new app that aims to speed up the time it takes to get items from the back room to the sales floor, using augmented reality (AR). In this test, instead of scanning the barcode on boxes that are ready to go, the app will use AR technology to highlight those boxes. The hope is that this will help to move the product to shelves, and in front of customers, faster than before. Another experiment uses a combination of handheld devices and in-store signage to help associates better navigate to the right locations when picking items for online orders. In early tests, Walmart says the percentage of time it takes associates to find the items has already gone up by 20% in some of the categories that tend to be more difficult to find.

The fourth test will expand and build on an experimental checkout experience Walmart previously announced in June. In this store, Walmart does away with individual checkout lanes, and transitions cashiers into the role of “hosts” in a new area of the store that resembles a self-checkout destination. Here, customers can opt to check out themselves or have a “host” offer full-service checkout. In either case, store staff are around to help with any issues that arise.

The expectation is that checkout lanes will move more quickly than the old style of individual checkout lanes. With the latter layout, a surge of new customers coming to the registers could cause bottlenecks if there weren't enough lanes staffed. In the long run, the new layout could free up cashiers to help with other tasks in store as a checkout station may not need as many “hosts” on hand to run things.

The four stores may test other technology and digital solutions in the future, as well, but Walmart didn't expand on its roadmap plans. Two of the stores in Northwest Arkansas, including a Bentonville location, are up and running. Two more are planned to be up and running soon.

Each store will have four new employees staffed to aid with the prototypes — a product manager, a technologist, a business owner, and a designer.

“We’re moving quickly to use our physical retail stores to not only serve in-store shoppers, but to flex to meet the needs of online shoppers, too, in ways that only Walmart can,” said John Crecelius, Walmart U.S. SVP of Associate Product and Next Generation Stores, in a statement. “That’s where our new test stores come in. Their purpose is to find solutions that continue to help our stores operate as both physical shopping destinations and online fulfillment centers in a way that has yet to be seen across the retail industry,” he added.