Great Jones is expanding into a new area of the kitchen, with what co-founder and CEO Sierra Tishgart described as the startup's biggest launch since it released its first products two years ago.

Ahead of launching the new bakeware line tomorrow, Great Jones is announcing that it has raised $1.75 million in new funding.

NEA partner Liza Landsman invested as well, and Tishgart said that Sweetgreen's Nic Jammet and Parachute's Ariel Kaye have joined the startup's board of directors. Tishgart noted that Great Jones has worked on collaborations and product partnerships with many of these investors, and she also pointed to Kaye and Parachute as providing a model for how Great Jones can grow.

“To me, starting with sheets, [Kaye] has taken a product which people loved and thoughtfully expanded to a broad selection,” Tishgart said.

She sees a similar path for Great Jones — just as Parachute has become a “one-stop shop” for bedding, Tishgart wants her startup to do the same for your kitchen. Great Jones launched with pots, pans, and a Dutch oven, then added a baking sheet and is now expanding into a whole line of bakeware. 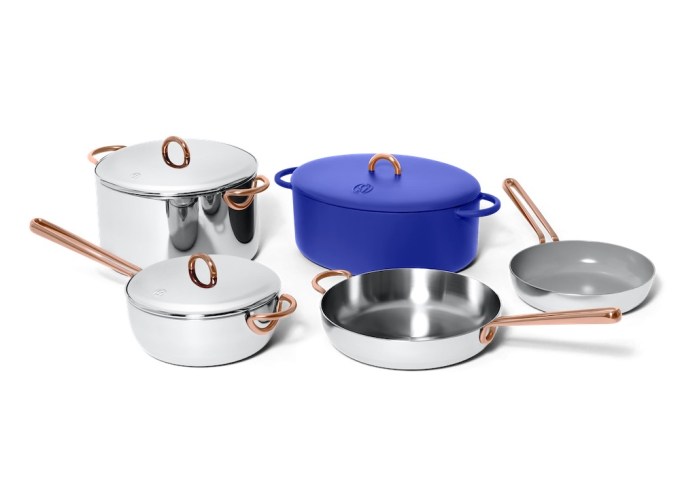 The new bakeware products (many of them inspired by classic Pyrex designs) include the Sweetie Pie ceramic pie dish, the Hot Dish ceramic casserole dish, the Breadwinner loaf pan, the Patty Cake cake pan and a new broccoli-colored version of the Holy Sheet baking sheet. You can buy the pieces a la carte (the Holy Sheet is $35, the pie pans are $45 and the bread pans are $65 for a pair) or purchase the whole set for $245.

Tishgart added that that the company has had a “really, really busy year” with lockdowns and social distancing.

“People are cooking more than ever,” she said. “This is a category and an industry that have really been able to thrive on this.”

At the same time, Tishgart emphasized that the growing interest from millennials and younger consumers is a long-term trend that won't go away when the pandemic is over — with the rise of celebrity chefs, high-profile restaurants and more food content than ever, “food has been a cultural force from 2004 on, in a major way.”

There have been challenges as well, particularly as the pandemic has affected supply chains. Tishgart said the company has spent much of the year “chasing product,” but it benefited from using a variety of materials and working with a variety of manufacturers.

“This is one thing that upfront made for a more complicated supply chain,” she said. “But it's a strong saving grace now, because we're not reliant on one factory or one part of the world.”

The funding, Tishgart said, will allow Great Jones to invest in further product development and production. And while there are plenty of other cookware startups raising funding, she said that “it’s motivating, it’s exciting to see how other people interpret it” and that the different brands “all speak to different customers.”