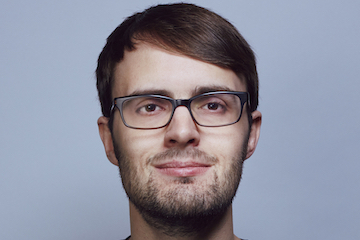 Finbarr Taylor moved to the U.S. nine years ago with a goal. He had just graduated from the University of Strathclyde in Glasgow, Scotland, with a Master of Engineering degree in Computer Science.

“I moved from Scotland to Silicon Valley with the express intent of starting a tech company,” he told me. “I’m doing it, and I’m having the time of my life. I’m in no rush to stop.”

Taylor’s tech company is Shogun, which provides innovative page-builder tools that enhance ecommerce sites. He is co-founder and CEO. The company has nearly 100 employees. It recently completed a $35 million Series B capital injection.

I spoke with Taylor earlier this month about Shogun, its products, progressive web apps, and the long-term outlook for the business. Our audio conversation is embedded below, followed by the transcript, which is edited for length and clarity.

Finbarr Taylor: I’m CEO and co-founder of Shogun. We create tools that help ecommerce merchants. We have two products. Page Builder is a drag-and-drop tool that’s integrated into Shopify, BigCommerce, and other platforms. It augments your existing ecommerce setup. Our second product, Shogun Frontend, transforms a storefront into a progressive web app with content management tools.

Bandholz: Beardbrand is a Shogun customer, in full disclosure to our listeners. Our ecommerce platform is Shopify. Tell our listeners why a merchant would use Shogun versus the native Shopify dashboard.

Taylor: Shopify has tools for building great-looking storefronts. Shogun takes some of those tools to the next level. Examples include customizing themes, landing pages, blog pages, product pages, and collection pages.

For themes, we use Shopify’s APIs around the four content types: pages, blogs, product pages, and collection pages. We push content through the APIs into the body fields of each of those.

And then, for products and collections, we use metafields to push the content. It’s not JavaScript or Liquid. It’s pure HTML, which means the code is clean, and Shogun is not in the traffic load path. So if we have an outage, which is rare, your pages stay up.

Taylor: Yes. When you use the image element in the Page Builder, we’re converting the image to WebP when possible, to optimize. We also automatically lazy load images. We are paying close attention to page speed. Images and scripts are the two things to watch. We minimize both.

Taylor: Google has championed progressive web app technology as a way to increase page speed. It’s similar to a native mobile app, but it’s running inside of the browser.

Six different pieces of technology make a progressive web app storefront. There are two JavaScript frameworks, such as React.js or Vue.js. The backend requires server-side rendering such as a Gatsby or a Next.js. You need a content delivery network that can handle builds, such as Netlify or a Vercel or a custom-built pipeline into CloudFront.

You need middleware to pool the content from your ecommerce platform into the build process. You need a content management system, which is typically headless, such as Content Flow or Prismic. And then you also need integrations for all those applications.

That’s a lot of stuff. It’s typically expensive and difficult to implement. But the result is a much faster and scalable website.

Our progressive web app replaces the storefront. We take over everything to the point of checkout. We don’t touch the checkout. It remains native to the ecommerce platform. When a customer checks out, the order is placed in the merchant’s store — Shopify, BigCommerce, or similar.

Taylor: Yes. You can build and publish different pages in Shogun and then drive traffic to all of them. You could split an ad test on Facebook, for example, and drive traffic from the ad to multiple pages. In Page Builder, you can create a page and click a button to start an A/B test. It splits the page into two variants. You can change whatever you want to test each one. We track and report the key metrics.

Taylor: Yes. We raised a $35 million Series B investment led by Accel, a venture capital firm. We’re using the money to double down on our research and development.

We’re also doing more marketing. Page Builder has acquired customers almost entirely self-serve and inbound. We haven’t actively gone out and tried to sell it. It’s a simple and affordable product, and it’s kind of sold itself, which has been awesome. But Shogun Frontend is a newer concept. It requires a bit of explanation and education around the benefits of progressive web apps and how they work. It’s a sales process.

So we’re building out our marketing and sales team.

Overall, we’re up to about 85 people. Soon we’ll cross 100. We’re hiring for engineering, design, product management, and sales and operations. We will probably double in the next 12 months.

Bandholz: Are you looking to sell the company?

Taylor: I get asked this question often. I have two parts to the answer. The first part is my co-founder and I are in no rush to sell the business. I moved from Scotland to Silicon Valley nine years ago with the express intent of starting a tech company. I’m doing it, and I’m having the time of my life. I’m in no rush to stop.

But when you raise money, the investors are going to want a return. And the more money you raise, the fewer options you have with your business. We’re to the point where we can’t stay private forever.

I see four options for what might happen with Shogun. First, we could IPO the business. Second, we could get acquired by a larger company. Third, a private equity firm could take a large stake in the company, perhaps a majority stake. The fourth outcome is the reality of all startup companies: we might fail. We have a ton of great customers and a lot of great traction. But a startup entrepreneur has to acknowledge the possibility.

Bandholz: Before we wrap up, I want to share how Beardbrand uses Shogun. We have single products such as beard oil, which has six variants or fragrances. Our challenge was we could not control which variant appeared on catalog pages. Those pages would default to the first variant. We use Page Builder to create fragrance pages that all link to the same product but pull in the variant imagery. The result is we have new landing pages that help people shop the fragrances.

Shogun also helps us bundle our products. Buy three, and the fourth one is on us. Or buy seven, and two are on us. That kind of logic wasn’t possible in Shopify without Shogun. It’s helped us grow our business this year.

Where can listeners learn more about you and Shogun?

Taylor: Our website is GetShogun.com. We natively integrate with several ecommerce platforms and are looking at adding others. I’m on Twitter, @finbarr, and LinkedIn.