After years of losses, African e-commerce giant Jumia claimed significant progress towards profitability in its Q4 2020. Backing that claim, Jumia reported record gross profit and some improvements to its cost structure.

The company wrote in its earnings release that while “2020 has been a challenging year operationally with COVID-19 related supply and logistics disruption,” it had also proven “transformative” for its business model.

Let's examine its financial results to see how Jumia fared during the pandemic year and see if we can see the same path to profitability discussed in its written remarks.

Other metrics were negative. The company's gross merchandise value (GMV), the total worth of goods sold over a period of time, grew 23% from the previous quarter to €231.1 million. The company said this was a result of the Black Fridays sales in the quarter. However, when compared year-over-year, Q4 GMV was down 21% “as the effects of the business mix rebalancing initiated late 2019 continued playing out during the fourth quarter of 2020,” Jumia wrote. 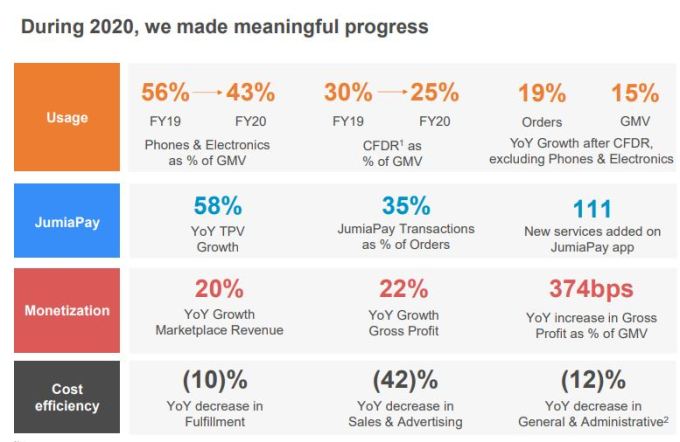 Last year, Jumia's Q4 gross profit after fulfillment expense was €1.0 million. We reported at the time that the number's positivity was commendable if merely another mile of the company's path to profitability.

The company built on that result in 2020, allowing it to report a record gross profit after fulfillment expense result of €8.4 million in the final quarter of last year. From a full-year perspective, the numbers are even starker, with Jumia managing just €1.5 million in 2019 gross profit after fulfillment expense; in 2020, that number grew to €23.5 million.

JumiaPay and improvement in losses and expenses

There are other metrics that are encouraging for Jumia.

Its gross profit reached €27.9 million in 2020, representing a year-over-year gain of 12%. Sales and Advertising expense decreased year-over-year by 34% to €10.2 million, while General and Administrative costs, excluding share-based compensation, came to €21.8 million in the year, falling 36% year-over-year.

Jumia lost less money on an adjusted EBITDA basis in 2020 of any of its full-year periods we have the data for. Still, the company remains deeply unprofitable today and for the foreseeable future.

Jumia's fintech product, JumiaPay, has been a factor behind its improving metrics.

Jumia went public in April 2019. Since opening as Africa's first tech company on the NYSE at $14.50 per share, the company's stock has been on a rollercoaster ride.

It traded at $49 per share at one point before battling with scepticism about its business model, fraud allegations, and shorting by Andrew Left, a well-known short-seller and founder of Citron Research. What followed was the company's share price crashing to $26 before reaching an all-time low of $2.15 on the 18th of March 2020.

Later, Left made a reversal after claiming Jumia had handled its fraud problems. He took long positions at the company and later proposed it would hit $100 per share. That change in market sentiment, coupled with the fact that Jumia changed its business model and halted operations in Cameroon, Rwanda, and Tanzania, enabled its share price to climb back, reaching an all-time high of $69.89 this February 10th.

Before today's earnings call, Jumia was trading at $48.81. Since dropping its latest data, the company's share price has expanded by around 10% to just over $54 per share as of the time of writing, indicating investor bullishness despite its continued operating and adjusted EBITDA losses.