The distinction between direct-to-consumer ecommerce and traditional retailing has been vanishing for years. But in a post-pandemic 2021, the convergence could be accelerating.

Here is the context. Traditional retail is layered and complex. The product on the shelf in a local brick-and-mortar shop may have been purchased through a network of intermediaries that started with a manufacturer in China and then included one or more distributors or the occasional manufacturer’s rep. Eventually, the product arrives at a traditional retailer’s own warehouse or store.

Along the way, each business profited. 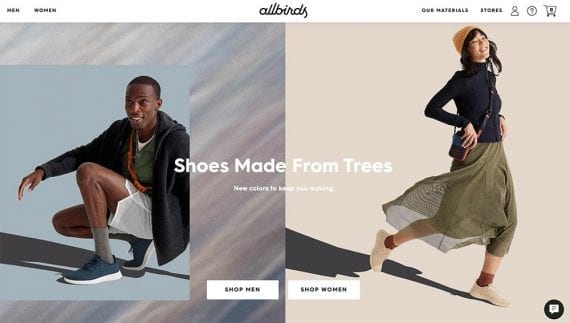 Allbirds is an example of a digitally native vertical brand.

In 2016, I wrote that one of the challenges retailers would soon face is that brands would sell against them.

“Many small online stores buy products wholesale from manufacturers or distributors to sell at retail. This is the classic business model for retail stores,” I wrote.

“Unfortunately, ecommerce’s low barrier to entry has encouraged many manufacturers to start selling directly to consumers. This means that the same company that sells your products may also be your competitor. As an example, Danner Footwear … sells not just wholesale to retailers but also directly to consumers on its website.”

In the past five years, DTC has become a channel for brands to grow and survive. This was especially true during the pandemic when many folks shopped online rather than in a physical store.

Retailers have been converging too. Amazon, Walmart, Target, and seemingly all major retailers have developed private label brands to sell against their traditional suppliers.

Take Wildology pet foods, for example. The brand is a partnership of approximately 40 farm-and-ranch retail chains in North America. The resulting product rivals something from the leading traditional pet food brands. Customers of Purina and Blue Buffalo just became competitors.

Even DNVBs are doing it.

“Beyond a few notable outliers, DNVB doesn’t scale. Nor does DTC. And the future demands embracing that reality,” wrote Aaron Orendorff, vice president at Common Thread Collective, an ecommerce agency.

“As evidence of scale’s adversity, many of DNVB’s founding parents — names like Bonobos, Casper, and Happy Socks — have entered wholesale either by way of acquisition or alliance. Traditional outlets like Walmart, Target, Macy’s, and Amazon are happy to serve as the middlemen that ‘vertical’ once cut out,” Orendorff wrote.

What’s more, shoppers might not care. For all of the attention on how brands, retailers, and DNVBs are getting mixed up, shoppers buy products they like from sellers they like.

To be clear, this trend is not new. It has been happening for years. The question is how the pandemic affects it.

Covid-19 is one of the most significant global events since World War II. It will have a lasting impact on economies, governments, and individuals.

Likely the pandemic has accelerated retail’s digital transformation for at least a few reasons.

All things considered, expect fewer distinctions between wholesale brands, retailers, and DNVBs in 2021 and beyond.