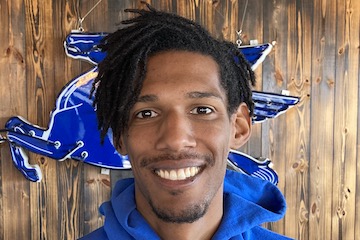 Marco Marandiz is a musician turned software engineer turned product designer. He’s worked for Capital One, HomeAway, and a failed startup. But it was his ecommerce consulting work for companies with unproven inventory that sparked the idea for Drop Party.

“I built seven ecommerce stores from top to bottom.,” he told me. “I designed the merch and the site. The client, however, was paying hundreds of thousands of dollars to buy unproven inventory. I thought, ‘I can do something better.'”

That thought is now Drop Party, a turnkey product designer, web developer, and merchant. It removes the risk for companies that have product ideas but no way to test them for viability. Marandiz launched Drop Party last year in Austin, Texas. It has grown to a five-person team. “We’re making money,” he said.

I spoke with him recently about his journey from rapper to entrepreneur. That entire audio conversation is embedded below. The transcript that follows is edited for clarity and length.

Eric Bandholz: Let’s talk about the path to Drop Party. You wanted to be a musician.

Marco Marandiz: Yes. I was recording my rap albums when I was 15. At 17, I moved by myself from Canada to Los Angeles to make music. I stayed with a friend for a month on his couch. To pay rent, I started working at Foot Locker and then a grocery store while trying to do music. I did that for a couple of years.

Then I realized the talent and grit that a music career requires. So, I went back to school at age 21 and got my degree in computer science. I started working as a software engineer.

Bandholz: That’s quite a shift going from music to computer science.

Marandiz: Right. My best friend and now my co-founder at Drop Party had been writing code since he was 11. We met in high school. While I was doing music, he said, “You should try computer science.” Funny enough, my mom has a master’s degree in computer science.

So, I started taking some online Python courses. My friend was teaching a semester-long class. I completed it in three days. So I thought, “I’m good at this.”

In music, you have different synthesizers and mixing boards and all of the technical aspects that aren’t necessarily fun, but they create the output you’re looking for.

Similarly, there’s a lot of technical stuff in computer science that allows you to create your end vision, but it’s not fun going through it. I realized I could create an app or a website or something that would be exciting. So that’s where I started.

Bandholz: So you got your degree and started working for the man.

Marandiz: Yes, I did one year at a biomedical company in Los Angeles. Then I worked for Capital One in the company’s headquarters in San Francisco. I worked under the new vice president of design there. It was an interesting team. I was one of three engineers out of 30, which had industrial designers and game designers. I did that for a year. I got married then, too.

So after repeatedly applying for various positions, I wrote an article on Medium titled, “I’m Done Pretending Silicon Valley Tech Is Visionary.” It was a frustration piece, but it blew up. A lot of people read it, including the entire executive team at Google and Expedia.

Then the CEO of HomeAway here in Austin called me and said, “You’re going to work for me.” I don’t know how he got my number. He called me at 7 a.m. Pacific Time.

So I came out and visited. It was nice, and I needed a job. So I worked at HomeAway.

But big companies kill your soul. I did that for two years. I met some amazing designers and engineers — people that I still work with today. We had all these creative ideas, and they just got squashed every six months by an executive team, a committee. I had no influence. So I said, “I can’t do this.” And I left.

And that’s probably when you came across me. I started writing these Twitter threads about direct-to-consumer stuff. I was trying to get in as a consultant to direct-to-consumer businesses. I had an engineering and product management background. I saw many first-time founders with great physical products who did a poor job communicating their value in ads and landing pages — through the product detail pages to checkout.

I thought, “Well, I can help with that.” I did some consulting gigs with new and established companies. The biggest was Chipotle. It was fun.

During that time, I met the founder of Elliot, the ecommerce platform, and joined as the head of marketing.

Bandholz: Elliot was going to take down Shopify.

Marandiz: That was the plan. I was not an engineer at this company. I did not know what was happening in the backend — how it was structured, how it worked. My responsibility was to market it.

Right before we were supposed to launch, there was some chaos in the technology that I was not privy to.

Bandholz: The company imploded. Now you’re on to Drop Party.

Marandiz: Post Elliot, I lost 15 pounds from the stress around the whole meltdown. I needed to make some money. I had no income. So I reached out to Westbrook Entertainment in L.A., which is Will Smith’s company. It’s a movie studio and a TikTok and Instagram production firm that does cool content. It’s also a talent management agency and a merchandising company.

I had met somebody there six months before. After Elliott fell apart, they said, “We need help with all of these sites, all these products.” And in three months, I think I built seven ecommerce stores from top to bottom. I designed the merch and the site. I did everything — fulfillment, customer service, all of that.

I basically built multiple small direct-to-consumer operations. But the client was paying hundreds of thousands of dollars to buy unproven inventory.

I thought, “I can do something better.” So the idea for Drop Party came out of that.

Drop Party switches the model. We design the product, sample it, photograph it, build a site, do the fulfillment, customer service, production, everything. We do all the sampling and put it in front of customers. We manufacturer it on the backend so that we’re not overselling or underselling anything. We make exactly as much as we need. And then I’m going to take all of the revenue, all the sales, and I pay you afterward with what’s left over after the good of goods.

Bandholz: So your clients have no risk.

Marandiz: That’s right. I get to take bets on products from companies, brands, and talent. We’re now a team of five, all heavily involved. It’s bootstrapped. It’s making money, so I have no complaints.

Bandholz: I’m a fan of bootstraps. If you’ve got a great product or service, you’re going to be in business. And if you’re profitable at a small size and can maintain that profitability, you’re never going out of business. You don’t have investors to please. They’ll want to shut the company down if it’s not growing at their rate. But if you’re happy and you’re making money, you’ll be in business forever.

How can listeners learn more about you and Drop Party?